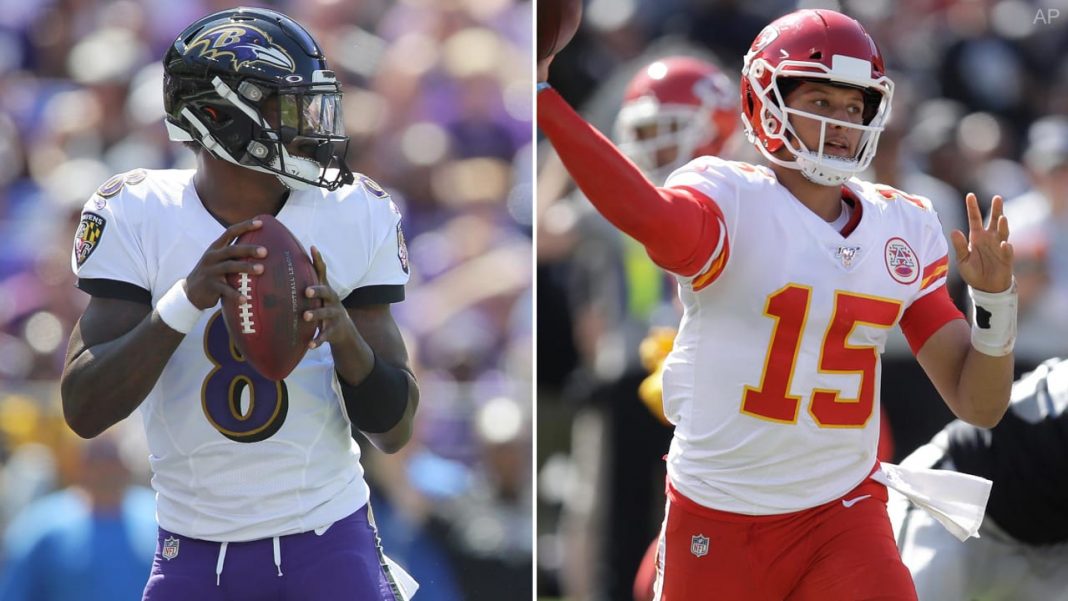 The last two regular-season MVPs will be facing off on Monday Night Football this week, Kansas City’s Patrick Mahomes and Baltimore’s Lamar Jackson.  They are both considered favorites to win the MVP this year, and their teams both have great odds to win the Super Bowl.

For either to happen, they need to do one thing—beat the other guy.

They will get their chance Monday night. Since the game features Mahomes and Jackson, fans will be watching, and many will likely put money down. According to the oddsmakers at BetOnline.ag, this one should go to Lamar Jackson (the Ravens are favored by three).

But for those who want to put money down on a wager featuring just Mahomes and Jackson, BetOnline.ag is offering a pair of prop bets that fit the bill:

In last year’s game between the two, Mahomes came out on top with a combined total of 383 yards (374 passing; nine rushing) to 313 for Jackson (267 passing; 46 rushing).  But Mahomes generating more yards last year means nothing. Jackson was still getting his feet wet, and the Chief’s offense was pretty much based on the passing game.

The same can still be said about the Chiefs offense, although they are better in the run game this year. But as for Jackson and the Ravens offense, it is safe to say he is not getting his feet wet anymore. His production through the first two weeks is proof of that.

But most of his runs are by design, which is likely not the case for Mahomes.

Of course, how well either produces will be somewhat dependent on the other’s defense. If that is the case, then the edge should go to Jackson since the Chiefs defense is much weaker than the Ravens. Then again, that was the case last year, too.

Deciding whether you should put money on Mahomes or Jackson for MVP is a tough one. But why pick between the two if you don’t have to? As two of the best quarterbacks in the league, their chances are already pretty good (Mahomes +450; Jackson +750). But if you can have both under one bet…sounds like a no-brainer, right?

Yes, the odds are smaller and the payout less, but the risk is significantly less.

However, Russell Wilson, who is now the favorite at most (if not all sportsbooks), has been lighting up defenses. If he can continue to do so, he will likely be the MVP this season. Kyler Murray has been a strong case, as had Aaron Rodgers, Dak Prescott, and Josh Allen.

Take Jackson to gain more combined yards. Neither has had a huge day this season, but the Chiefs and Mahomes seem to be focused on improving his decision making this season—which will mean fewer shots downfield. Don’t count on Mahomes to make it up in the ground game, either.

As for the MVP bet, three other guys (Wilson, Murray, and Rodgers) look like better candidates. Take ‘no.’