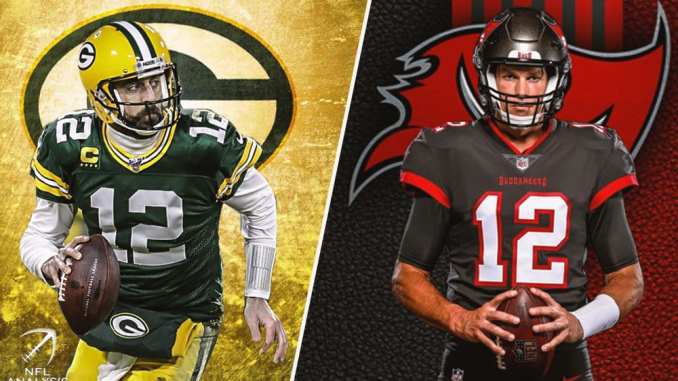 Tom Brady and Aaron Rodgers are two of the best quarterbacks in the NFL. Both are former MVPs, touchdown leaders, and Super Bowl winners. Each is off to a good start this season; Rodgers has 13 touchdown passes and Brady 12 (just counting the ones thrown to his own team, of course).

Fans always love to talk about how two greats will do when they play against each other. So, with the Buccaneers and Packers scheduled to play this week, many are wondering how Brady and Rodgers will fair. Who will throw more touchdown passes (odds via Bovada.lv)?

On an individual level, Aaron Rodgers has a better QB rating between the two (Rodgers—128.4; Brady—96.8). But there are other factors to keep in mind. Rodgers is in Year Two with his current offense. Brady is learning a new offense for the first time in his career.

At the same time, Brady has better receivers to work with than Rodgers. That is, when they are healthy—which hasn’t always been this season. Chris Godwin is listed as out, and Mike Evans has been nursing a sore ankle for weeks.

However, except for Davante Adams, who has been out but is not currently listed on the injury report, Rodgers does not have any star-level talent to work with. But he is still putting up great numbers anyway.

So, how do we figure out who will throw for more touchdown passes when their teams face each other in Week Six?

Brady’s Buccaneers are a little more likely to score via the passing game than via the run; 75 percent of their touchdowns can be attributed to the passing game. For Rodgers and the Packers, the percentage is just a shade lower since they have scored two more total touchdowns, one passing, and one rushing.

From an offensive perspective, both teams will be leaning more on the pass than the run. But who is going to have more success?

Tampa Bay has had the stingier defense between the two allowing 22.4 points/game relative to Green Bay’s 25.3. Both have allowed seven passing touchdowns, but the Buccaneers defense has accounted for six interceptions. The Packers only have two.

While that could spell trouble for Rodgers and the Packers, Rodgers is known for being smart with the ball. He has yet to throw an interception this season and only threw six over the last two.

Brady has had moments of brilliance this season, but there has also been a lot of rust as he works out the kinks of a new offense. On the other hand, Rodgers has been excellent no matter who lines up at wide receiver (or tight end, as we learned last week).

Tom Brady is the GOAT, but the GOAT has not been consistent enough to bet on in this case. Go with Rodgers.