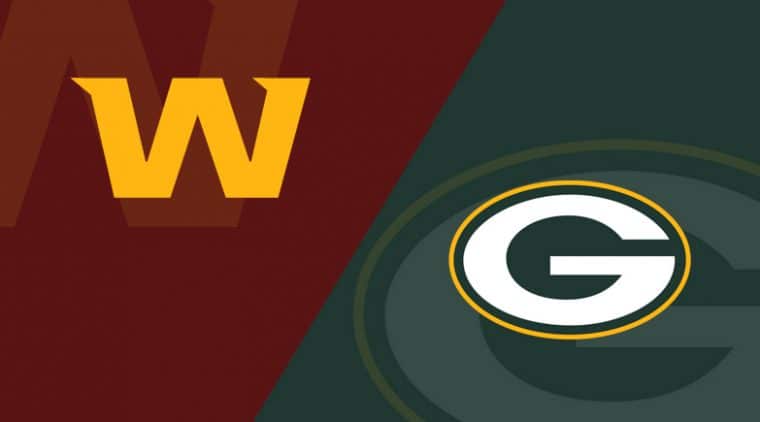 Washington meets Green Bay for the first time since 2019, so we bring you the best betting pick and odds for this NFC showdown at Lambeau Field, as the 2021 NFL season continues with Week 7 matchups on Sunday, October 24.

The Packers are listed as firm 8-point home favorites on BetUS Sportsbook. Washington is a +300 moneyline underdog with a total of 48.0 points, so let’s take a closer look.

The Washington Football Team fell to 2-4 SU and 1-5 ATS on the season following a 31-13 defeat to the Kansas City Chiefs in Week 6. It was another abysmal defensive performance by Ron Rivera’s boys, who have allowed 30-plus points in four straight outings. Also, they failed to score against the Chiefs in the second half, blowing a 3-point lead from the break.

Washington is yielding a whopping 31.0 points per game (32nd in the NFL) on 113.5 rushing yards (19th) and 309.5 passing yards (32nd). The Football Team’s defensive unit is undoubtedly one of the biggest disappointments of the season.

On the other side of the ball, Washington is tallying 22.7 points per contest (21st). The Football Team ranks 19th in rushing yards per game (106.3), while Taylor Heinicke has tossed for 1,390 yards, nine touchdowns, and six interceptions thus far.

The Green Bay Packers improved to 5-1 SU and ATS on the season following a 27-17 road victory over Chicago this past Sunday. They held the Bears to just 277 total yards, while Aaron Rodgers led the way on the other side of the ball, tossing for 195 yards and a couple of touchdowns while scoring once on his own.

The Packers are undefeated since Week 1 and an ugly 38-3 loss to the Saints at the neutral site. Aaron Rodgers has already thrown for 1,436 yards, 12 touchdowns, and just three picks, while Davante Adams has caught 46 of his 66 targets for 668 yards and two scores.

Washington is in big trouble, as its defense is a complete mess. Hereof, I’m backing the Packers to win by at least a touchdown. Aaron Rodgers is the reigning MVP, and he’s been excellent over the previous few weeks, so the Packers’ passing offense should make the difference.

Green Bay listed three players as questionable, including LB Preston Smith. On the other side, Washington will certainly miss wideouts Curtis Samuel and Cam Sims, guard Brandon Scherff, and tackle Sam Cosmi, while starting RB Antonio Gibson is questionable to play. The shorthanded visitors will need a lot of luck to keep it close, especially if the Packers continue to play solid defense.

When it comes to the totals, betting on the over should be a way to go in this matchup. I’ve mentioned how bad Washington’s D has been lately, and if FT continues to struggle against passing, the Packers will easily surpass a 30-point mark.

The Packers’ defense is playing above expectations, so we might see some regression in the next few weeks. The total has gone over in four of Green Bay’s last five outings at home and four of Washington’s previous five games overall.