Best Online Sportsbooks
Home Sports Football Want To Bet On The Misery of Carson Wentz And The Philadelphia... 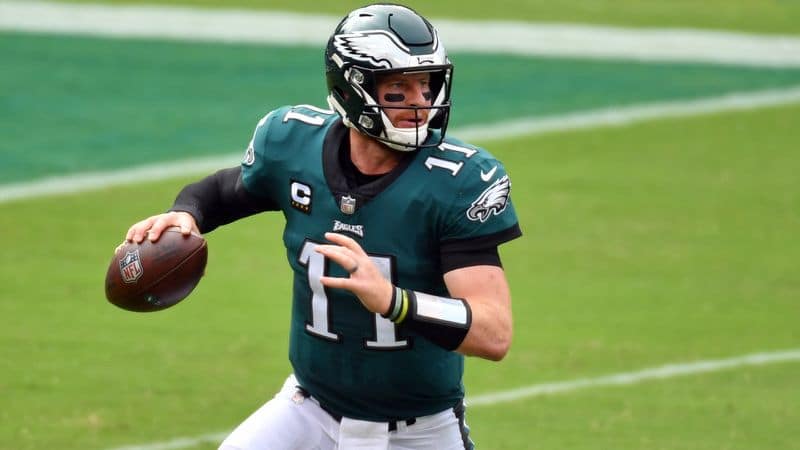 When the 2020 NFL season started, fans of the Philadelphia Eagles had no reason to expect their team would be winless three games in. They also didn’t expect their superstar quarterback, Carson Wentz, to turn into an absolute dud.

It wasn’t that long ago when Wentz looked like a lock for MVP before an injury ended his season early. But now, he is tied for the league lead in interceptions (six), is setting a new career-low for completion percentage (59.8), and can’t win a game to save his life.

To be fair, injuries have decimated the roster. But that is no excuse for the way he is playing. However, if you are enjoying his misery and that of the Eagles fan base, BetOnline.ag has some prop bets that may interest you:

Many have speculated that his lackluster play is because he is trying to play through an injury. Wentz and Eagles head coach Doug Pederson have said that is not the case. But considering his injury history and the groin issue he had towards the end of training camp, it makes sense.

Getting benched because of injury would make sense, but that will not happen if Wentz and the team do not admit that he is indeed injured. Since Pederson has already pledged his loyalty to Wentz, it is hard to see him benching his struggling quarterback for performance reasons.

This season, Wentz has had two in each game—and against lackluster defenses like the Cincinnati Bengals and Washington Football Team. At this pace, he’ll cover the over in Week Ten against the New York Giants.

However, it is unreasonable to think he will continue to throw two picks a game. His career-high is 14, and he’s thrown just seven in each of the last three seasons. With how things are going, he will likely cover the over.

Right now, he is tied with Kirk Cousins for the lead league. But Mike Zimmer will start running the ball more if Cousins doesn’t get his act together. Since it is hard to tell if there is an end in sight for Wentz’s woes, he is probably a good bet to lead the league this year.

Injuries have taken their toll on the San Francisco 49ers defense, but they have it the Eagles wide receivers eve harder. At Thursday’s practice, Wentz had one healthy wide receiver to throw to. Now, some of the guys sitting out will play Sunday.

But they were not looking too good when healthy. Chances are they are not going to be any better injured.  Since Pederson is more apt to have Wentz play through his struggles than run the ball, go ahead and take ‘yes.’ Don’t bet too much, though.

This bet would be an easy ‘no’ if the Cowboys played better than they have. But since they are just 1-2, the deficit is not too steep for the Eagles to overcome. However, don’t bank on the Eagles getting their act together just yet.