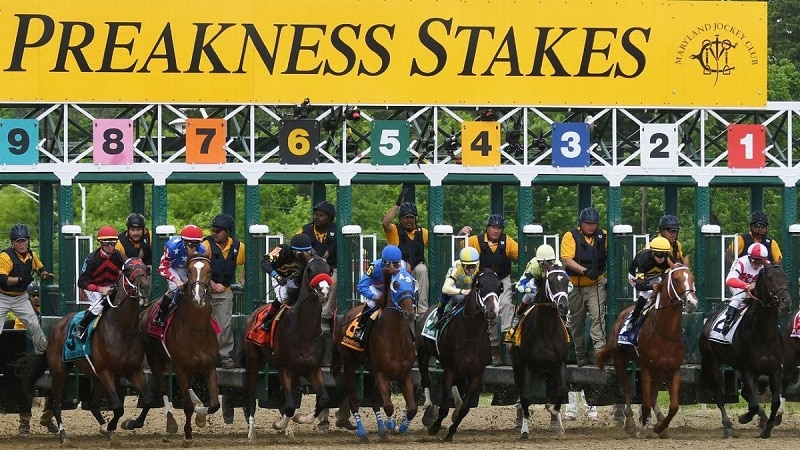 We know it’s pretty exciting to go to the track, even if you’re just there to watch the simulcast.

But when you are wagering on a race, you are somewhat limited as to what you can do. When you play in the racebook and sportsbook at BetOnline, however, you get a whole lot of choices.

And they’re all pretty interesting.

When you’re in the racebook itself, you can engage in all the wagering that is allowed at the track, including Win-Place-Show, exactas, trifectas, superfectas and more.

In the sportsbook, you can take advantage of playing head-to-head matchups, which adds a whole new dimension to the proceedings. And it also provides the material for BetOnline’s  $10,000 Preakness Stakes Matchups Contest , where if you get a good enough score, you can win a share of the prize purse (more details below).

And then there are the special props on the race.

One example involves the winning time.

The fastest time in traveling the mile and three sixteenths in the Preakness was Secretariat’s 1:53 in 1973. That immortal was an anomaly.

In the last 20 runnings of the Preakness, on only six occasions has the time been lower, and once (2005 with Afleet Alex) it was right on the nose. So if you only want to go by the math in that recent sample, you’d be “Over” 68.4% of the time, which would translate to a price of around -215. So you might be getting the best of it, particularly as times have not shown to be trending lower to any meaningful degree.

Another prop involves the winning margin in the race.

For what it’s worth, these horses combined have scored nine victories OVER a length and a half and ten wins UNDER that margin.

You can also bet on whether Medina Spirit is going to be able to hold onto his Kentucky Derby title, after testing positive for a banned substance afterward. The positive reading on that test needs to be confirmed by a second test, which had been taken simultaneously, with those results due sometime soon.

A lot of veteran observers, and horsemen, believe that the substance, a skin cream called betamethasone, is not performance-enhancing. But that is not the issue with Kentucky’s racing commission, which has the power to disqualify the horse.

BetOnline oddsmakers seem to think he has only a small chance of escaping this:

But that is not likely to have an impact on the way Bob Baffert sends his horses out for the Preakness. In fact, since the news won’t be in by Saturday, it should have no impact at all.

And last but not least, how about the last AND least?

You have the ability to bet on the horse that will finish last, or as veteran race caller Trevor Denman might say, DEAD last.

All we can say here is that the horse at the rail, RAM, looks like he’s got a lot going for him, on paper. That is to say, this is the progeny of American Pharoah, who won the Triple Crown. And the legendary D. Wayne Lukas is the trainer.

But Ram, who’s never appeared in a stakes race, lost seven races before breaking maiden, and in only one of those was he in the money. That actually gives him a lot of “credentials” with which to make a ‘loser” play.

And now a word from our sponsor……

Enter the $10,000 Preakness Stakes Matchups Contest and win a piece of the $10K prize. Just hit the head-to-head matchups and you’re all the way home!…… And don’t forget there are a host of props available in the BetOnline sportsbook, and of course dynamic action in the racebook…… You need to bet at least $10 in real-money wagers on the Preakness, so open an account using every conceivable payment method, including Bitcoin and other cryptocurrencies!