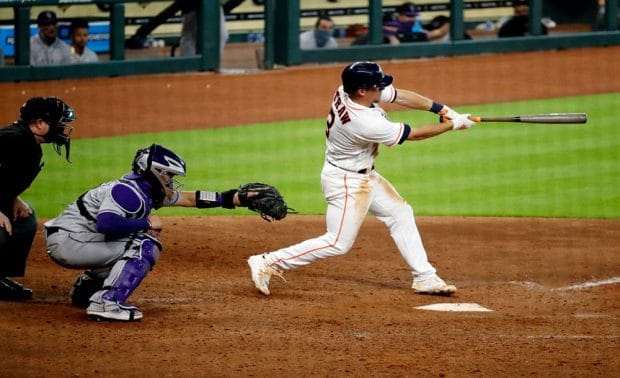 The MLB season is coming to an end with this World Series, and hopefully, Philadelphia and Houston will provide plenty of excitement when they meet on Friday, October 28. Here you can read the best Phillies vs. Astros betting pick and odds.

Houston is welcoming Philadelphia in Game 1 of the World Series at Minute Maid Park. The Astros are -167 moneyline favorites on BookMaker Sportsbook, while the total is set at 6.5 runs. These inter-league rivals have faced on three occasions this year, and the Astros won two.

Phillies made three upsets to reach the WS

The Philadelphia Phillies managed to surprise all three teams they faced in the playoffs and made it to the World Series by losing just two out of 11 games they played. They swept the St. Louis Cardinals over a two-game series on the road before eliminating the reigning champions Atlanta Braves in four games. After this win, nobody took the Phillies for granted anymore, and they proved that the underdog tag suit them with a 4-1 series win over the San Diego Padres.

Bryce Harper sent Philadelphia to the World Series with a two-run homer shot in the 8th inning of the NLCS Game 5 against San Diego. Jose Alvarado got a win, his first-ever of the playoffs. Zack Wheeler was impressive yet again as he surrendered two runs on three hits with eight strikeouts and no walks.

The Houston Astros had an easier path to the World Series as they didn’t have to play the Wild Card after winning the regular season title in American League. Still, the Seattle Mariners proved to be a tough nut to crack in the ALDS, even though the Astros swept them in three games. Actually, Houston had an easier job against the New York Yankees in the ALCS.

It seems that Game 3 of that series was crucial. It was the first game in New York since the series moved there, and the Astros got a big 5-0 victory, which obviously shook the hosts. Jeremy Pena with a three-run homer and Alex Bregman with a crucial RBI single gave the Astros a 6-5 win in Game 4. Hector Neris was credited with a win, which was his second of the playoffs. Lance McCullers Jr. lasted 5.0 innings and allowed three runs on eight hits while fanning six with a walk.

Both starts have excellent numbers against opposing batters. Nola’s numbers are actually better than Verlander’s, but after the latest start against San Diego and his poor display, I can’t trust Nola in this one. On the other hand, Verlander was great against the Yankees in his previous start and recorded even 11 strikeouts during 6.0 innings with just one run surrendered. The Phillies showed they mean business this year, and I do expect them to put up a fight in this series, but Game 1 belongs to the Astros. Still, I am pretty sure Houston is not going to get another series sweep.

I noted that both starters own opposing batters in their respective careers, even though the sample is not very big. However, it is important to mention that Verlander allowed a .184 BA to the Phillies’ batters in 38 at-bats, while Nola holds a .130 BA against the Astros’ hitters in 46 at-bats in his career. Both were impressive in their lone starts against this particular opponent in 2022, so I expect to see a low-scoring affair here. Under is 6-2 in Philadelphia’s previous eight interleague road games; Under is 5-1 in Houston’s last six overall, while Under is 6-1-1 in the Astros’ previous eight playoff home games.