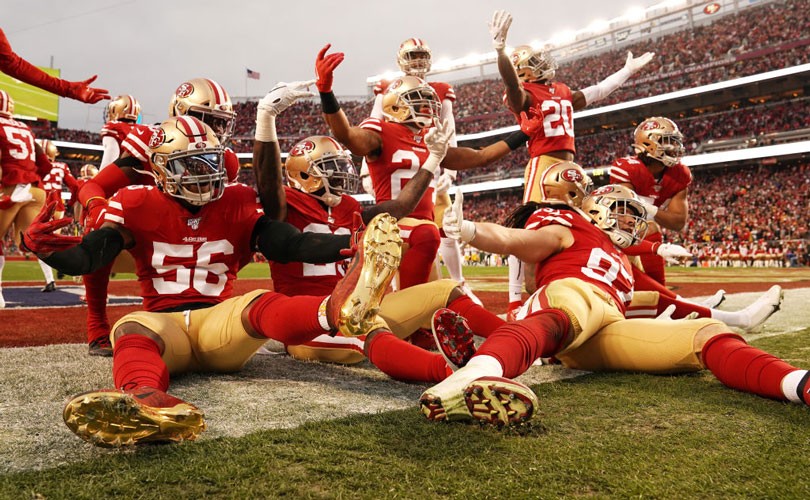 Fans of the San Francisco 49ers began to have hope for their franchise when head coach Kyle Shanahan was hired. Expectations began to rise after fans got a taste of Jimmy Garoppolo under center. An injury to Garoppolo forced them to wait another year to see how good the team can be.

But then they finally found out last season. Losing to the Chiefs in the Super Bowl was not how anyone wanted the season to end. But 13 wins in the regular season, a division title, and a conference championship are nothing to sneeze at.

So—how are they going to do this season? According to the oddsmakers at MyBookie, the expectations are kind of high. They are favored to win their division (+105), the NFC (+525), and to cover the over on their win total.

After going 13-3 last season, it is not hard to imagine them winning at least 11 this season. The 49ers offseason losses were minimal, and they had a good draft, so an argument could be made that the team should be even better this season.

Taking the over sounds like an easy decision. But for those that want more of a challenge, BetOnline.ag one of the best online sportsbooks is also offering odds on a specific block:

It is hard to imagine them having such a fall from grace that they go winless or win no more than four games. They have some tough games on their schedule, but they are going to at least beat the Bengals, Browns, Redskins, Panthers, and Falcons.

Those that believe the ‘Super Bowl Hangover’ is real and think the 49ers will falter will want to take the 5-9 bracket. But in the last ten years, the only team to really fall victim to the curse was Carolina following their loss to Denver in Super Bowl 50.

The 10-14 bracket is the most logical choice. If they don’t cover the over and win just ten games, you still win. Their 2019 win total fits, and chances are good they win somewhere near that mark again—or maybe even go undefeated.

With games against the Seahawks (2X), Cowboys, Saints, and Packers, they are bound to lose a close game to at least one of them. While they could still afford to lose one more, there is the ever-present possibility they have a bad day against someone like Arizona, Philadelphia, or New England.

So—how should you bet when it comes to the 49ers?

There is a strong possibility they win the division, but the odds don’t make it worthwhile. With the competition in the NFC expected to be stiff this year, pass on their conference title odds as well. However, take the over on their win total.

As for which bracket their win total will fall in to, the safe bet is 10-14. However, the payout should they win 15-16 Is worth skipping your latte for a few days.