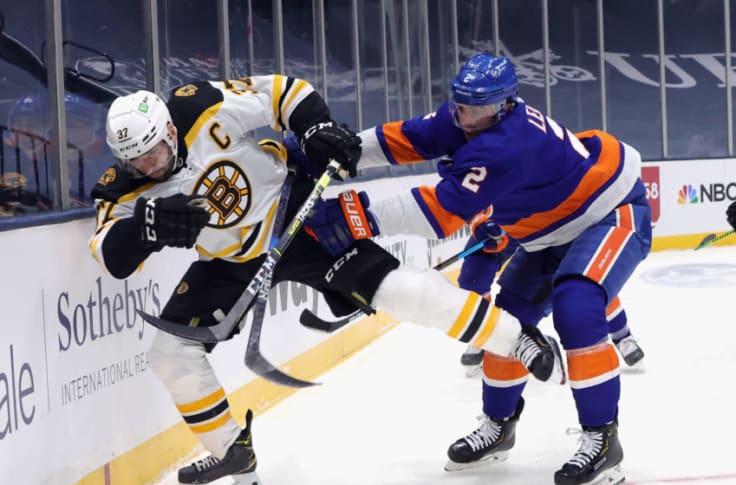 The last big card of the NHL regular season is on Monday. Sunday kicked off the NHL’s “Buffer Zone”, which was a week left open to accommodate games postponed due to COVID-19 or for some other reason. Everything was scheduled to stop on May 8, but nobody really expected that to be the case.

There are a few meaningful games on Monday May 10. All of the playoff spots are basically accounted for, but one game that could have some seeding implications is the matchup between the New York Islanders and Boston Bruins. The Islanders trail the Bruins by one point in the East Division and Boston has a game in hand that will be played Tuesday against Washington.

Boston is a big -165 favorite with a total of 5.5 at Bookmaker Sportsbook in this matchup. Are they deserving of that big of a favorite role? Let’s find out!

Some recency bias has had an impact on this line, but with good reason. New York won on April 11 to improve to 27-11-4 with an overtime win against the Rangers. Since then, the Islanders are just 5-6-2 over their last 13 games. You’d certainly like to go into the playoffs with a little bit of momentum, but losing six of the last nine would not apply.

The Islanders have not played well on the road. That was never more evident than when they lost twice to Buffalo on May 3-4 to give themselves basically no hope of home ice advantage in any series this postseason. The Islanders are 21-4-3 at home this season, but 11-13-3 on the road. This is the road regular season finale, but it could determine whether or not the Isles play Game 1 in Washington or Pittsburgh when the postseason starts.

The Islanders have still allowed the second-fewest goals in the NHL, so they’ve achieved their objective on that front. They also have the second-fewest goals scored of any playoff team. Only Nashville has scored fewer goals. The difference being that Nashville is -3 in goal differential and New York is +29. The Stars are the only other team with fewer than 160 goals that has a positive goal differential.

The Isles are rested here, so we should see Semyon Varlmov get one more tune-up for the postseason. “Varly” is 19-11-4 with a 2.02 GAA and a .930 SV%. Those are some outstanding numbers, but you can see the lack of offensive support plain as day for Varlamov and the other netminders with such a pedestrian record despite an excellent save percentage. He’s only allowed 70 goals in 35 games played and has seven shutouts on the season.

The Bruins are going in the opposite direction of the Islanders. After losing 8-1 to Washington on April 11 to fall to 21-12-6, the Bruins are 11-3-1 over their last 15 games. They did suffer a setback in Saturday’s 5-4 loss to the Rangers. They’ll look to avoid losing consecutive games for just the seventh time this season. They’re playing well at the right time and the Islanders are not, hence the big -165 line in a matchup between teams that are largely pretty equal this season otherwise.

The Bruins have only allowed 132 goals, but have scored a few more than the Isles with 164. The two teams do play a somewhat similar style, though the Bruins don’t have the same enormous home/road split. Boston is 17-7-3 at home and 15-8-4 on the road. Boston has found more power play success with a 21.9% rate compared to New York’s 18.2% mark. At 5-v-5, it’s hard to really tell a difference between the two teams.

The goaltender situation for the Bruins isn’t as cut and dry as it is for the Islanders. This is the front end of a back-to-back for Boston. They’ll play at Washington on Tuesday, so we’ll see Tuukka Rask on Monday and likely see Jaroslav Halak on Tuesday. Halak has only played twice since April 3, as he was the backup goaltender, but also got COVID-19.

Rask allowed five goals in that loss on Saturday, so he’ll try to have a bounce back effort in this one. Rask has a 2.29 GAA with a .914 SV% on the season. He’s looking for his 15th win of the season. He’s only played 23 games as the Bruins have alternated goaltenders effectively this season.

The Islanders and Bruins both have some incentive here with regards to seeding. It is a matter of personal preference whether a team would rather face Washington or Pittsburgh in the first round. My guess here is that the Islanders will push hard for that final road win and confidence booster. The Bruins still have a chance at the #3 seed in the East with a loss. They’re playing better, but the Islanders are priced pretty high here.

The Islanders won the first five head-to-head meetings before losing the last two. I think their plus-money price is worth a bet here.