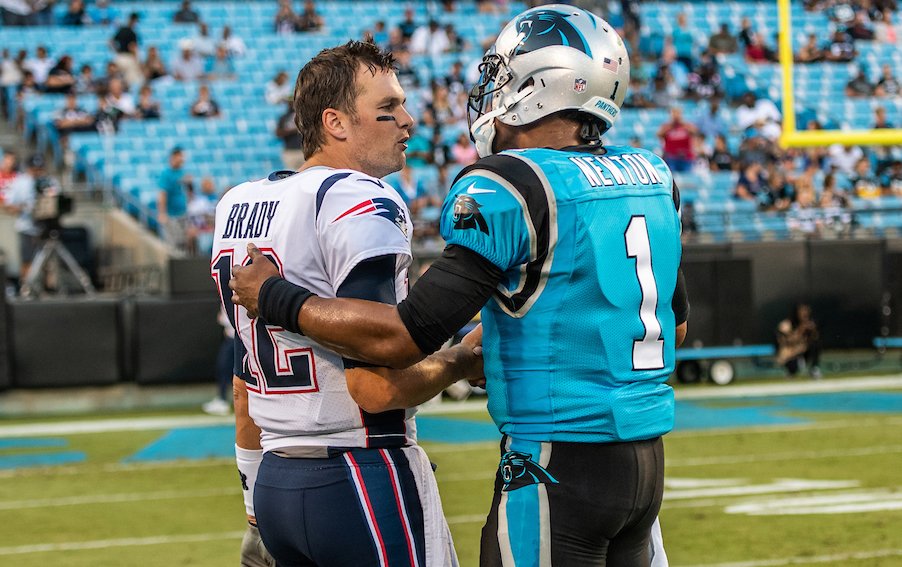 That has certainly been the case with Tom Brady’s new team, the Tampa Bay Buccaneers, and his old one, the New England Patriots. Now that the Patriots have signed Cam Newton, the fan can now do the same with the two former MVP’s.

Bovada.lv is offering odds on who will do better this season—assuming they both start in Week One and the regular season contains 16 games:

Fans and media types have been predicting Newton would eventually land with the Patriots. When New England didn’t draft a quarterback, they became even more certain it would happen. As it turns out, they were right.

While he is expected to start in Week One (-200 at Bovada.lv), he is far from a lock to do so. Assuming he does, can he outdo Brady in any of the three categories?

Newton will have a much better defense with the Patriots then Brady will with the Buccaneers making it easy to see him win as many games or more. Since he gets half a game, should the Bucs and Pats finish with the same record, Newton wins.

However, while the Bucs defense is not going to be better, the potential for their offense could make up for it. Brady will have two of the best wide receivers in the NFL to work with, a luxury he never had in New England.

Along with Mike Evans and Chris Godwin, he will have Rob Gronkowski. Tack on the lack of a running game, and Brady could be in for huge numbers this year—assuming he hasn’t lost his edge like many speculated last year.

In New England, Newton will have an aging duo in Julian Edelman and Mohamed Sanu, Sr., but no one else stands out. Marqise Lee could become a valuable target if he can stay healthy, which remains to be seen.

Newton hasn’t cleared the 4000-yard mark since his rookie season. Brady last failed to hit that mark in 2016 when he only played in 12 games.

Newton has never been a great passer, and while Bill Belichick and Josh McDaniels will get more out of him than Ron Rivera ever did in Carolina, they can’t make him an efficient passer at this stage in his career. New England will likely lean on the run this season because of that, which means it is highly unlikely Newton passes for more touchdowns or yards then Brady does.

As for the head-to-head wins question—take Brady. It is more likely he revives the Buccaneers defense much more than Newton revives the Patriots. New England’s defense will help, but Tampa Bay’s offense will simply outscore some opponents.