Menu
Home » NBA Finals Props Game 3 – A Repeat For Giannis? And Will it Be Blue For Jrue? 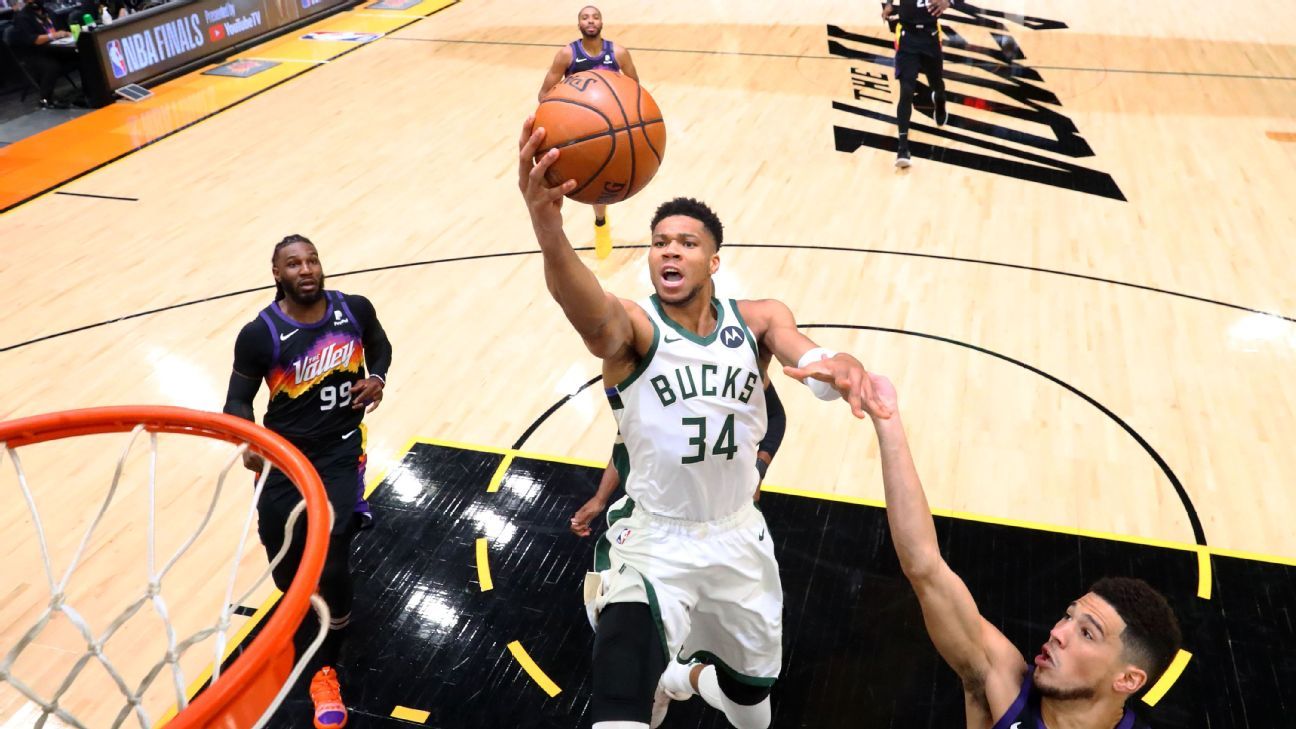 There are a lot of ways to take a look at Game 3 of the NBA Finals. Naturally there is a pointspread on the game, where the Milwaukee Bucks, playing at home, are a four-point favorite over the Phoenix Suns. And the total on the game stands at 222 points.

But if you’re a customer at BetOnline, props – both on the game and on players – should become a big part of your activity.

And we would love to show you around a couple of them, so you can make up your mind before the scheduled 8:05 PM ET Sunday tip-off.

First of all, let’s cut the game in half. This is the first half line on Game 3:

Teams are dangerous returning home after losing the first two games of a playoff series on the road. In this situation the home team is a 65% proposition in the first half over the last 18 seasons. And over the last 41 instances, it is 75.6%.

So it is a play that definitely must be looked at. Also consider that the Bucks, when laying points at home in the first half, are a 70.7% play. So that’s our play as well.

As far as individual players are concerned, it is imperative that we take a look at Giannis Antetokounmpo, since he is the central figure for Milwaukee, on both offense and defense. And there was a tremendous adjustment downward for Game 2, as opposed to his numbers in the previous series, with regard to the combination of his points, rebounds and assists.

It was posted at 42.5 for Game 2, and his 42-point total (his highest ever in a playoff game)almost took care of that all by itself.

So now that he has proven that he is healthy enough to play and is sharp, what do the BetOnline oddsmakers have to say?

Keep something in mind – only three times in 17 games in this postseason has Giannis surpassed this number, although he’s come close. And he’s had some tremendous games along the way. This is just a big number to overcome, unless he really explodes like he did in Game 2. We’re not looking for an “over” here.

We’re skeptical about Holiday’s ability to exceed these offensive numbers, because of a couple of things: he has such a heavy defensive responsibility, because at various times, he is going to have to deal with either half of that explosive guard duo of Devin Booker and Chris Paul. And that is the kind of thing that could sap the energy that he can spend at the other end of the court.

Also, he’s not likely to get “bonus” points; that is, he bricks it from three-point range. He is below 30% from downtown in the playoffs and that doesn’t really improve at home. So we like an “under” here.

At BetOnline, they give you a chance to get very much into the game, with a virtual plethora of props that cover almost everything!….. And remember that once the game tips off, you can keep things going with the “Live Betting” option. And with Odds Boosters, explosive payouts on pre-selected parlays await you…….. Cryptocurrencies, including Bitcoin, are welcome for deposits!