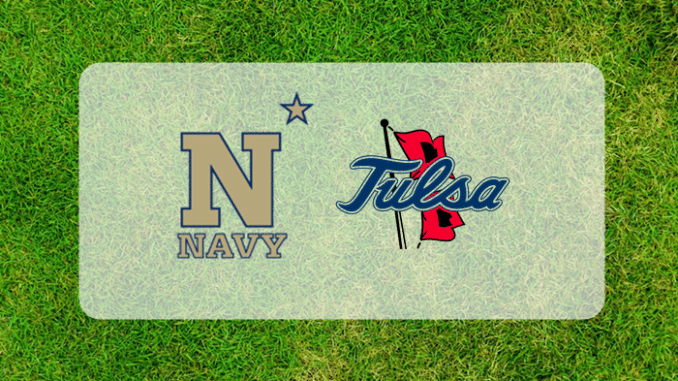 Week 9 of the 2021 college football season continues Friday, October 29, with a couple of games around the country, including the American Athletic Conference showdown at Chapman Stadium in Tulsa, so we bring you the best Midshipmen vs. Golden Hurricane betting pick and odds.

Last year, the Golden Hurricane snapped a five-game skid against the Midshipmen with a 19-6 victory as 12-point road favorites. Tulsa is an 11.5-point home fave this time around, while the totals are listed at 47.0 points on Bookmaker Sportsbook.

Navy battled bravely against the No. 2 Cincinnati

The Navy Midshipmen (1-6; 4-3 ATS) are on a three-game losing streak following a 27-20 defeat at the No. 2 Cincinnati Bearcats last Saturday. They outgained one of the best teams in the country in total yards (308-271) and easily covered a massive 28.5-point spread, but ultimately failed to stop their slide.

Tai Lavatai’s touchdown with 50 seconds left on the clock scared the Bearcats for sure, and the Midshipmen will look to take some positives into their next game. Lavatai went 11-of-15 for 116 yards and an interception, adding 21 carries for 22 yards and a couple of scores, while Isaac Ruoss had 19 carries for 80 yards.

The Tulsa Golden Hurricane are coming off a bye, looking to keep the momentum on their side. After four losses in their first five games of the season, the Golden Hurricane have recorded two straight wins over Memphis at home, 35-29, and South Florida on the road, 32-31.

Tulsa avoided an upset against the Bulls, playing as a 7-point road fave. The Golden Hurricane rallied from a 14-point deficit and won the game thanks to Shamari Brooks’ touchdown with 47 seconds left on the clock in the fourth quarter. They racked up 535 total yards (269 rushing) and yielded just 268 in a return, but Davis Brin completed only 22 of his 39 pass attempts and finished with a couple of TD passes and interceptions.

Both teams have improved over the last few weeks, so we should see an entertaining and competitive game. Hereof, I will take the visitors to cover. Tulsa should win straight up on the back of its offense, but the Golden Hurricane’s defense could struggle against Navy’s triple-option offense.

The Golden Hurricane have covered the spread only once in their last four showings as double-digit underdogs. All their three wins in 2021 have come by seven or fewer points. On the other side, Navy kept it close against the powerful SMU offense in Week 6, while last week’s display against Cincinnati showed some serious progress.

Although Navy will eat the clock with its ground game, I don’t see these two teams struggling to move the ball. As I’ve mentioned above, Tulsa is tallying 457 total yards per game and should find a way to exploit Navy’s secondary. On the flip side, Tulsa’s defense has been awful as of late, allowing 29 or more points in five straight contests.

The total has gone over in Tulsa’s previous six outings. The under has hit in seven of Navy’s last ten games overall, but I think these two teams will combine for more than 47 points.