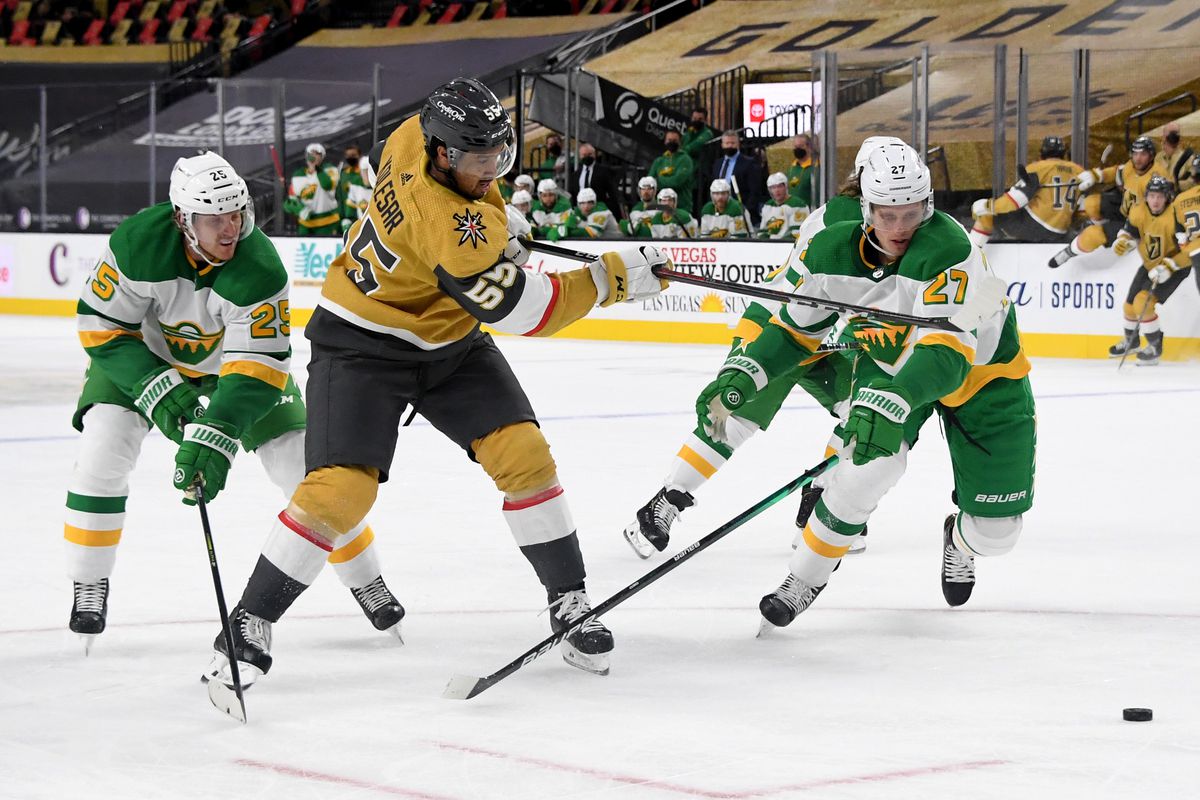 Three teams are on the brink of elimination in the NHL Playoffs tonight. Two of them are on the road, as the Pittsburgh Penguins and Florida Panthers will try to force return trips back home for a decisive Game 7. The other one is on the road and in a place where wins have not come easy. That team is the Vegas Golden Knights and they are taking on the Minnesota Wild.

Vegas had a chance to close out the series at home two nights ago, but Cam Talbot stole one for the Wild and now the Golden Knights are in a familiar spot. Even with their playoff successes, they’ve never closed out a playoff series at home. They’ll look to end this one as a -135 favorite at Bovada Sportsbook with a total of 5.5.

Vegas dominated the game at 5-v-5. Minnesota scored three 5-v-5 goals in the first period to just one for Vegas. The Knights didn’t score at full strength again. Their only other goal came on the power play. Vegas had 12 high-danger chances to just five for Minnesota and had a 10-1 edge over the final two periods of the game, but Cam Talbot was equal to the task on all of them. Vegas dominated in 5-v-5 Corsi and Fenwick as well, so they had all kinds of shot attempts, tons of puck possession, and the better scoring chances.

And lost the game 4-2 anyway. This has been something of an Achilles heel for Vegas, a team that often grades very well in all of the advanced metrics, but doesn’t seem to be able to finish off a lot of those chances. In the second period, Vegas had an xGF of 1.46 to Minnesota’s 0.04 at 5-v-5 and still came away trailing in the game 3-2.

So, we’ll see what happens in Game 6. Marc-Andre Fleury had a bit of a rough start in the first period of Game 5 and he’ll need to set a better tone for tonight’s matchup. He has a 1.40 GAA and a .946 SV% in this series, so he has been quite good, except for that first period on Monday when Vegas was in quicksand to start the game.

It can’t be comforting for the Wild to know that their two wins in the series have been stolen by their goaltender. Vegas had an awesome first period and a solid game overall back in Game 1, but Talbot stopped all 20 shots that he faced and all 42 shots for the game. He was 38-of-40 in Game 5, just one game after Vegas only managed 17 shots on goal, but still took home a 4-0 decision in Game 4.

Talbot will probably have to stand on his head again, as the Golden Knights should come with a huge push. Perhaps we should give some measure of credit to the Wild defensemen and forwards. Vegas had a huge shot edge and did have some quality chances, but a lot of the shot attempts in Game 5 and throughout this series have come from low-percentage scoring areas. Talbot has had a clean look at a lot of the shots that VGK has taken. It’s harder to see in the box score, but Minnesota has had a decent game plan in that regard.

Game 5 was really the first extremely lopsided game at 5-v-5. The Knights have scored nine goals at full strength to seven for Minnesota. Amazingly, Minnesota actually has more scoring chances and more high-danger chances in the series, a testament to how they’ve kept Vegas to the outside and the low-percentage scoring zones. This series has actually been pretty even, despite the perception that Vegas has been the better and more dominant team.

The question now is whether or not Minnesota can figure it out at home. The Wild have played quite well on the road in this series, but lost both games at home by a combined score of 9-2. Talbot didn’t play as well. The defense didn’t keep as many shots to the outside. Will that change with Minnesota backed up against the wall of elimination yet again?

Vegas and Minnesota have played a pretty even series. Most of the games have just been decided by the better goaltender or by special teams. For whatever reason, though, Vegas seems to be a better road team in the playoffs. Maybe it’s the depth. Maybe it’s the focus level without all of the home distractions. Whatever the case, Vegas looks like the side to take to close out the series here, as we should get a complete effort from them and likely a better game from Fleury.