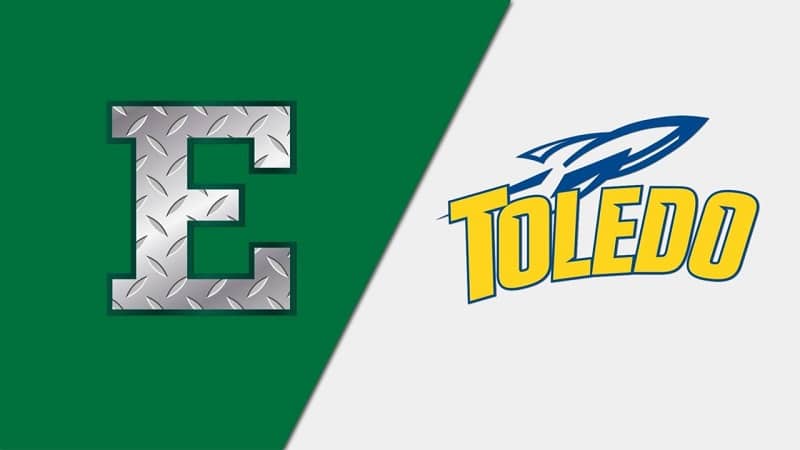 Week 10 of the 2021 CFB season will begin Tuesday, November 2, 2021, with the Mid-American Conference showdown at Glass Bowl in Toledo, Ohio, so we’ve prepared the best Eastern Michigan Eagles vs. Toledo Rockets betting pick, tips, and odds.

The Rockets will search for their third straight victory over the Eagles, opening as 9-point home favorites with a total of 52.5 points on most top sportsbooks. Toledo has won 13 of its previous 14 encounters with Eastern Michigan, covering the spread ten times in the process.

The Eastern Michigan Eagles (5-3; 3-5 ATS) are coming off a bye, aiming for their second straight victory. Back in Week 8, the Eagles thrashed off the Bowling Green Falcons as 4-point road favorites, 55-24, to improve to 2-2 in the conference play.

The Eagles’ offensive line finally had a good game after allowing 14 sacks over the previous three games. Senior QB Ben Bryant tossed for 286 yards and a couple of touchdowns against the Falcons, while a couple of his relievers threw a TD each.

The Rockets smashed Western Michigan to stop a two-game slide

The Toledo Rockets (4-4; 4-4 ATS) will look to stay on the winning track following a bye, as they smashed the Western Michigan Broncos 34-15 as 1.5-point home underdogs in Week 8. The Rockets completely shut down the Broncos in the second half and overcame a two-point deficit from the break while scoring 21 unanswered points.

Freshman QB Dequan Finn completed just eight of his 24 passing attempts for 138 yards and a couple of touchdowns. Junior RB Bryant Koback led the backfield with 17 carries for 100 yards, and the Rockets gained 192 rushing yards on 43 attempts.

The Eagles rely on their passing game, so they should have a mountain to climb in this matchup with one of the best secondaries in the country. The Rockets allow only 180.4 passing yards per contest (13th in the nation) and a 112.3 passer rating (12th).

Also, the Eagles should struggle to cope with the Rockets’ ground game. Eastern Michigan surrenders 184.1 rushing yards per game (101st) and 4.7 yards per carry (tied-99th), so I’m going with the hosts to cover a 9-point spread.

The Rockets’ last six games went in the under, as well as eight of their previous ten contests when they were listed as favorites of nine or more points. On the other hand, the over is 10-3 in Eastern Michigan’s last 13 games on the road, and it is 10-4 in the last 14 encounters between the Eagles and Rockets.

The betting trends are not helping a lot, and the line is a tricky one at 52.5 points. I lean the over because of the Eagles’ leaky defense. The visitors could easily fall behind early, and their offense is certainly capable of hitting a 20-point mark against the stout Toledo defense.