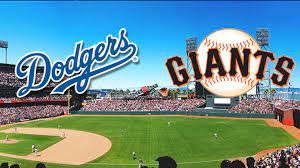 A big board of baseball features an outstanding matchup on the West Coast in our spotlight game preview. That is the matchup between the Los Angeles Dodgers and San Francisco Giants. This will be the first meeting of the season between the two teams, as the Dodgers send Trevor Bauer to the mound and the first-place Giants counter with Alex Wood.

The first of 19 should have a palpable buzz for both teams, especially since we have a three-horse race in the NL West. The Padres, who host the Mariners this weekend, are very much in that mix as well.

The Dodgers are favored in the -130 range at BetOnline Sportsbook for Friday night’s opening game and the total is set at 7.

The Dodgers are 4-11 in one-run games this season. They are 1-6 in extra inning results. Their “struggles” this season can simply be attributed to that. This is still a 25-18 ballclub heading into this series with the first-place Giants, but a lot of things can and will shift in this division moving forward.

The Dodgers still boast one of the league’s best lineups, a group that ranks fourth in wOBA at .331. The Dodgers have the highest walk rate in baseball, but have not been able to hit for as high of a slugging percentage as we would expect to see. Their .407 SLG only ranks 11th among the 30 MLB clubs and their 50 home runs rank 17th.

The Dodgers also rank 15th in SLG with runners in scoring position. The inexplicable loss of power is a big reason why Los Angeles has been in a position to lose so many close games. They haven’t been able to get those game-changing doubles and home runs to the same degree this season. It is a bit of a mystery as to why. It could be the baseball, but everybody is dealing with the same thing. The Dodgers rank 20th in HR/FB%.

Even with some of the rotation shuffling that the Dodgers have had to do, they opted to push Trevor Bauer’s start back to Friday to line him up against the Giants. Bauer wants as much work as possible, but he’ll be going on an extra day of rest here. He’s been everything that the Dodgers could have wanted with 77 K in 57.1 innings and a 2.20/3.15/3.10 pitcher slash. Bauer has a .183 BABIP against and an 89.1% LOB%, so some natural regression could leak in, but he also has the huge strikeout rate and tremendous stuff.

The weird thing about the Dodgers being 4-11 in one-run games is that their bullpen has a 3.48 ERA and ranks in the middle of the pack in FIP at 3.85. They’ve issued a few too many walks and have the fourth-lowest LOB% as a unit at 66.7%. That should stabilize as the season goes along, but it has been a thorn in the team’s side to this point.

While the Dodgers are having all kinds of issues hitting for power, the Giants are not. Their 17.7% HR/FB% leads the league and that has been a fundamental change over the last two seasons for the Gigantes. It has always been said that Oracle Park is a detriment for them, and maybe it still is, but they’ve been able to produce a much higher level of contact quality that has translated into extra-base hits.

And yet, even with the much larger HR/FB%, the Giants are only three points ahead of the Dodgers in the SLG department. Why? Because they’re batting 15 points lower as a team. San Francisco’s 26.1% K% is among the highest in the league, though they are offsetting it to a degree with a high rate of walks at 10.8%. Of course, their 62 homers are also second in baseball.

What has been happening with the Giants during their renaissance of analytics under Farhan Zaidi, formerly employed by the Dodgers, is the reason why they were able to be so good in the bubbled season last year and then also carry that over to this season.

It hasn’t just been the offense. The Giants boast the best starter ERA in baseball and only trail the Dodgers in fWAR among rotations. The Giants even have a lower FIP at 3.08 compared to 3.11. Alex Wood has been a big part of that equation with a 1.75 ERA and a 2.75 FIP in his 36 innings of work. Wood spent most of the last two seasons hurt and they became throwaway years. For his career, he now has a 3.38 ERA with a 3.48 FIP in 887.2 innings. He’s a really solid and valuable pitcher.

The one glaring area of weakness for the Giants is the bullpen. Teams win around 83% of the time with a lead after five innings and the Giants have had a lot of leads. The fact that the San Francisco bullpen ranks 28th in FIP has not been a huge issue and the team’s ERA in relief is 4.29, a much stronger number. They just don’t rack up a lot of strikeouts, so that hurts the FIP.

A great pitching matchup tonight with two talented offenses against two guys off to great starts this season. I do like the Dodgers tonight, though. The high K% for the Giants very much comes into play with a Bauer start. Wood will allow more balls in play in all likelihood, even if he is extremely adept at inducing weak contact. I see more staying power to Bauer’s numbers than Wood’s for this season to date and the Dodgers bullpen is the better of the two relief units.Pick: Los Angeles Dodgers