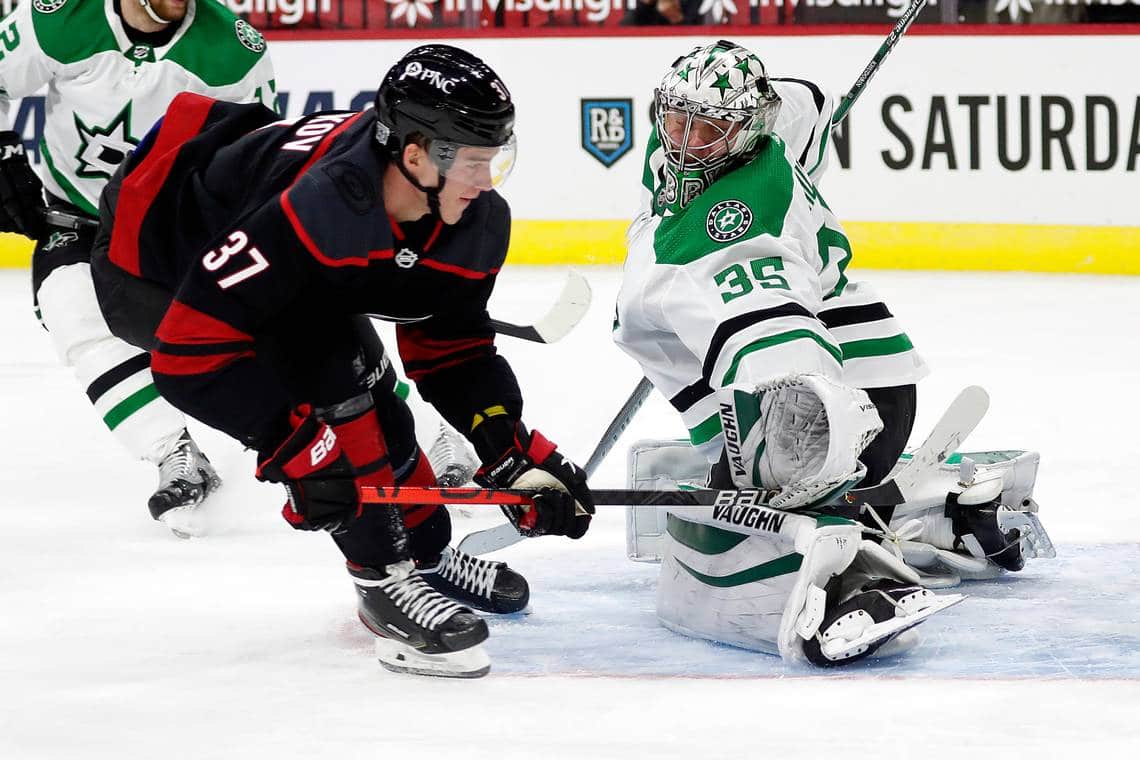 Sixty minutes wasn’t enough time to decide last night’s game between the Carolina Hurricanes and the Dallas Stars. The two teams will run it back tonight with an 8:30 p.m. ET puck drop that can be seen on ESPN+ and on regional TV.

Despite the loss last night, Carolina is still lined in the same spot tonight, a spot that bettors moved the line into as Carolina opened lower than -120 and got bet up into the -125 or -130 range. That’s the number that we see at Bookmaker Sportsbook with -125 on Carolina and a total of 5.5 with heavy under juice.

Last night’s game was a pretty even one across the board. Should we expect more of the same tonight?

A letdown spot for Carolina shouldn’t have come as a surprise. The ‘Canes trailed 2-0 early on Monday after playing Tampa Bay and Florida for two games apiece down in the Sunshine State. Those are the chief rivals for the Hurricanes with the current divisional setup. Even with last night’s loss, the Hurricanes are still in first place in the Central Division.

The situation is a lot different for Dallas, as the Stars sit two points below the cut line in the division based on the playoff format. They absolutely have to have every point that they can get. The Hurricanes have all but clinched a playoff spot. It’s all about seeding now.

James Reimer got the start last night for Carolina, which means that we should see Alex Nedeljkovic tonight. The 25-year-old is 12-4-3 on the season with a 1.98 GAA and a .930 SV%. He has really emerged as a reliable backstop in light of the injury to Petr Mrazek. Nedeljkovic should be the playoff starter at this point in time and gives the Hurricanes the best chance to win.

We’ll see if the Hurricanes can ride the momentum of a good third period from last night into today’s game. They out-chanced the Stars 8-3 over the final 20 minutes and that included the game-tying goal to get to overtime and at least secure a point for the loss. Carolina is a significantly better team at 5-v-5 than Dallas, though the defensive style for the Stars is the reason why they are hanging around in this playoff picture.

The Stars are playing a ton of hockey in a short period of time. They’ve also bonded together to really make a big playoff push. Dallas is 7-1-2 in its last 10 games. The question is how long the Stars can sustain this type of effort level game in and game out with so many games condensed into a short window of time. Dallas has not had multiple days off since February 14-17 when games were postponed.

Their early-season COVID pause left the back of the schedule quite busy and they’ve played 35 games since February 22. Five of their last nine games have gone to overtime, so they’ve really been playing a lot of hockey and a lot of high-leverage games. They’ve also been doing so without starting goaltender Ben Bishop, who is out for the season.

Last night’s win was the 10th of the season for rookie goaltender Jake Oettinger. We should see wily veteran Anton Khudobin tonight with the back-to-back. Khudobin is 11-9-6 with a 2.35 GAA and a .910 SV%. Khudobin was pulled after the first 20 minutes against the Red Wings with three goals allowed on nine shots on April 22, but came back on April 24 with 16 saves on 17 shots in the 2-1 overtime win. The Stars will hope for a repeat performance of that from both Khudobin and also the team.

Dallas’s 5-v-5 team defense is quite stellar. The lack of offense is the reason why Dallas is in limbo in terms of the playoffs. Special teams could be the deciding factor in this one. Carolina has the league’s best power play. Dallas has the league’s sixth-ranked power play. The problem is that the Stars have given back some of those PPGs by having a league average penalty kill. Carolina’s PK% ranks in the top five.

The Hurricanes have only lost three consecutive games twice this season and now have the better of their two goalies in play for this game. They also aren’t in as bad of a spot coming off of the games against Florida that could have been a contributing factor in falling behind 2-0 in the first period last night.

Everything sets up better for Carolina here, but the line has not really adjusted. We’ll take it and back the ‘Canes tonight.