Menu
Home » Can Anyone Beat Out Justin Herbert For Offensive Rookie of the Year? 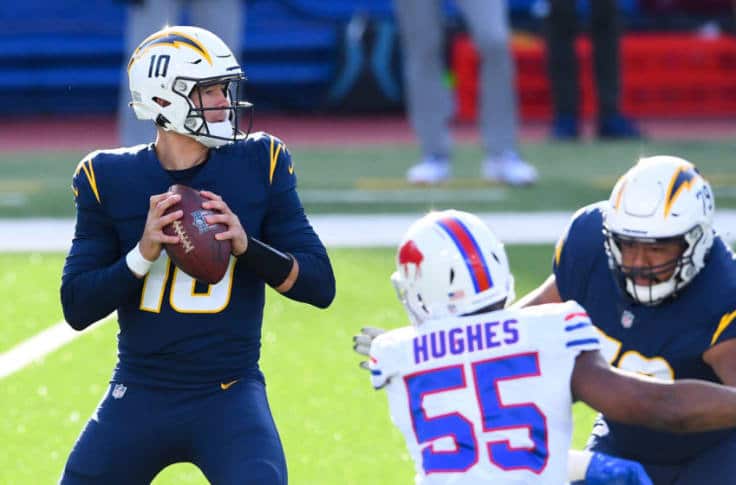 But does the quarterback for a 3-8 team really deserve the award over someone on a better team? The oddsmakers at Bovada.lv still have Herbert as a strong favorite, but there are some intriguing candidates:

Herbert has played well, completing 66.9 percent of his passes for 3015 yards and 23 touchdowns with seven interceptions. He is on pace to set rookie records for completions, attempts, completion percentage, passing yards, and passing touchdowns.

That certainly sounds like an award-worthy performance, right? But what about the Chargers record? Well, it did not matter when Kyler Murray won last year, and the Cardinals had just a 5-11 record.

A case could possibly be made for Pittsburgh Steelers wide receiver Chase Claypool. The second-round pick has made several big plays for the undefeated Steelers this season and has time to make many more.

Depending on how the season finishes out for the Washington Football Team, a good case could be made for Antonio Gibson. His 645 rushing yards has him tied for 12th in the league, but his 11 rushing touchdowns are ranked third behind Dalvin Cook (13) and Derek Henry (12).

His last two games were his best of the season (94 yards and a touchdown; 115 yards and three touchdowns). Both were wins that have pushed Washington right into the midst of the NFC East division race.

Right now, Gibson’s season may not be award-worthy. But if he continues to perform as he has and Washington wins the division—well, a good case could be made for him.

Someone not listed by Bovada.lv but deserving of consideration is Jacksonville Florida Jaguars running back James Robinson, an undrafted free agent. Yes, he is playing for a terrible team, but he is producing better than most running backs in the league.

Justin Herbert is the safe and obvious choice, of course. But it could certainly be worth putting a little something down on Gibson. He might not be getting much attention right now, but when Washington gets closer to winning the NFC East, he will.