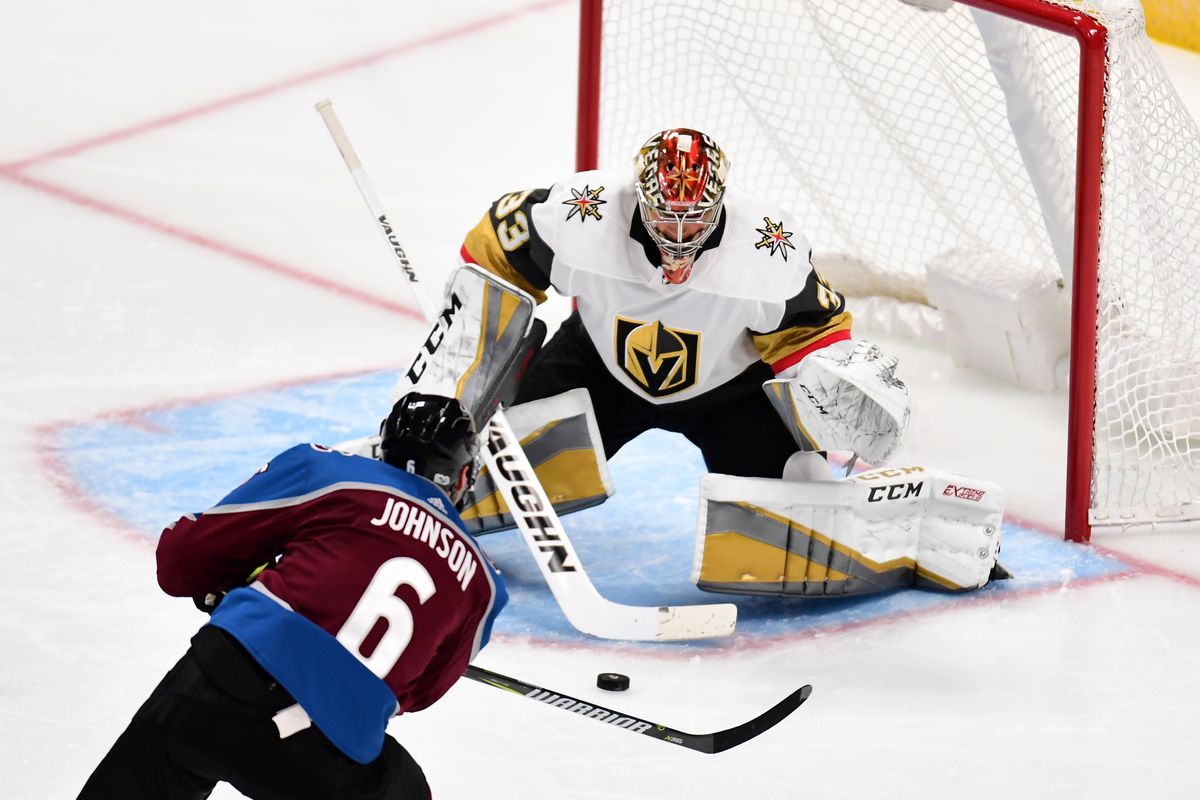 Will the venue change help the Vegas Golden Knights even up the series? After getting blown out in Game 1, Vegas looked much better in Game 2, but still came up on the short end. With their backs against the wall in front of a raucous and rowdy home crowd at T-Mobile Arena on Friday night, they’ll try to climb back into the series.

The Colorado Avalanche have to be feeling good about the 2-0 lead, as they are now 6-0 in the NHL Playoffs. This will be their shortest favorite role of the postseason with the line in the -115 range at Bookmaker Sportsbook with a total of 5.5 as they look to put a stranglehold on the series.

The Avalanche got away with one in Game 2. After thoroughly dominating Vegas every which way in Game 1, the Golden Knights found their legs in Game 2 and were clearly the better team in the game. Vegas had 23 scoring chances to 18 at 5-v-5. Vegas had nine high-danger chances to eight for the Avs. The shots on goal were extremely lopsided at 41-25 for the game and 35-13 at 5-v-5.

Philipp Grubauer stole one. The Avs were going to need it at some point and they got it in Game 2 on Wednesday when Grubauer was the first star with 39 saves on 41 shots. Grubauer has now allowed just 10 goals on 176 shots in six playoff games with a .943 SV% and a GAA of 1.66. He was excellent during the regular season with a 30-9-1 record, a 1.95 GAA, and a .922 SV%. He’s followed up nicely with that in the postseason.

Once again, the Colorado stars shined. Mikko Rantanen scored the game-winning goal on what was kind of a questionable penalty call on Vegas early in the overtime period. Brandon Saad scored his fifth goal of the playoffs. Tyson Jost got one on the power play to give Colorado a 2-1 lead late in the first. The Avalanche special teams have been exceptional in these playoffs with 10 goals in 23 opportunities.

Colorado already has four power play goals in the two games in this series. The Golden Knights simply have to stay out of the box. Fortunately, going back home should help, as there tends to be an officiating bias towards home teams. The Avs will have to be better at 5-v-5 than they were in Game 2, but the power play has been a saving grace to say the least.

Well, the Golden Knights failed to win either of the two games in Denver, but they have to be happy with how they played in Game 2. Some ticky-tack officiating was the subject of Peter DeBoer’s post-game press conference, but he could just as easily point to his team’s inability to score goals. That has been a big story this postseason and it becomes magnified as Colorado keeps scoring on the man advantage.

The Golden Knights have now played nine games this postseason and have only scored 23 goals. Vegas has 234 shots at 5-v-5 and only 16 goals. They rank seventh in 5-v-5 shooting percentage. Colorado, as you would expect, is tops in the postseason. Vegas has had chances. They have the most high-danger chances of any team, which is of course a byproduct of playing so many games, but they are tied for fourth in high-danger goals.

This has been the story of the playoffs for Vegas. While all of Colorado’s guys seem to be lighting the lamp regularly, Vegas has not gotten consistent scoring from anybody. That needs to change if the Golden Knights are going to get back into this series. Getting a bunch of shots, like they did in Game 2, is great, but they need to be high-quality chances and chances that get finished by the top players.

Vegas has had a ton of low-percentage shots in these playoffs. They’ve been unable to cash in enough opportunities and you can’t give all the credit to Cam Talbot or Philipp Grubauer. At some point, the Golden Knights need to score goals.

Marc-Andre Fleury stopped 22 of 25 shots as he went back into the crease for Vegas. He has allowed 15 goals on 198 shots this postseason with a .924 SV% and a 1.86 GAA. Fleury was certainly better than the rusty Robin Lehner was in Game 1. He also gave up two power play goals and there isn’t much you can do about that, but until his teammates start scoring, he’ll have to be a brick wall.

Vegas played a lot better in Game 2, but most of the shots were low-quality. Once again, Colorado made the most of their chances, especially on the power play. Vegas stepped up to match Colorado’s speed a bit better in Game 2, but the Avalanche continue to use that speed to draw power plays. Unless that changes, this series looks like it could be a quick one. Colorado at a price like this, even on the road, is too cheap to overlook.