Menu
Home » Any Chance Dabo Swinney or Nick Saban Are Coaching Elsewhere In 2021? 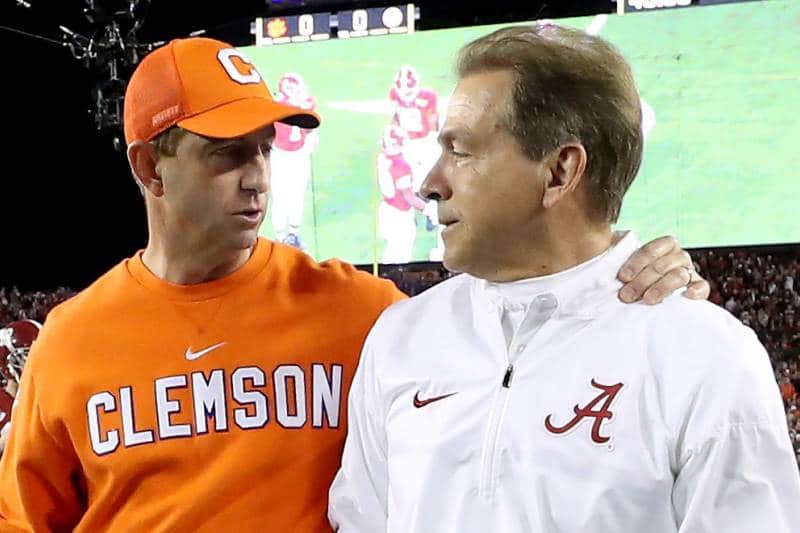 Alabama head coach Nick Saban and Clemson head coach Dabo Swinney are easily the best at what they do. They have been the best college football has to offer in recent years, and there is no reason to think that it will change anytime soon. So, why are we even talking about them leaving?

Because, like the young men that they coach, they are ultra-competitive. They like to be challenged and may be interested in proving how good they are. The best way to do that would be to rebuild another program or move up to the NFL.

But what are the odds either is going to do so next year?  Bovado.lv has odds posted for both head coaches:

Saban took his shot at the NFL and failed miserably. But he has been the cream of the crop in the college football ranks since returning to it. Now that he is older and wiser, he may be able to do a better job of turning a team around this time.

Plus, he does seem to get more and more agitated at the silliness in college football—but there will undoubtedly be plenty of that in the NFL.

Swinney’s name has been in NFL head coaching conversations in recent years, but he has never been a serious candidate for anyone. A few years ago, he was asked about coaching in the NFL and gave an answer Clemson fans had to love:

“I’m very happy where I am, and I’m very happy coaching college football. The great thing about college players is a chance to really build young men, on and off the field. But the NFL is great. I love the NFL. I would never say never. But right now, I’m a college coach.”

So, it’s possible. If the right situation presented itself, maybe he would do it. During a recent morning show, an ESPN analyst talked about a scenario that makes sense. He suggested that Swinney could be interested in the Jacksonville Jaguars.

With the Jags looking like they are going to tank this season, he could take over them and then draft his current quarterback, Trevor Lawrence, with the No. 1 pick. Factor in the nine other draft picks the Jags have in the next draft to help get the rebuild underway, and the job looks pretty good.

It is more likely Swinney makes a move between the two, but only because Saban has tried already. But neither will probably do it.

Saban may get annoyed at things ever year, but he has an incredible amount of job security. If Alabama were to go winless for the next three years, the Crimson Tide would likely give him a fourth to get things turned around before even thinking about firing him.

As for Swinney, his situation is about the same. It would take years of losing and an embarrassing scandal for Clemson to even think about firing him. While he may be a little kooky, Swinney isn’t going to let anything scandalous happen.

Take both to stay right where they are.